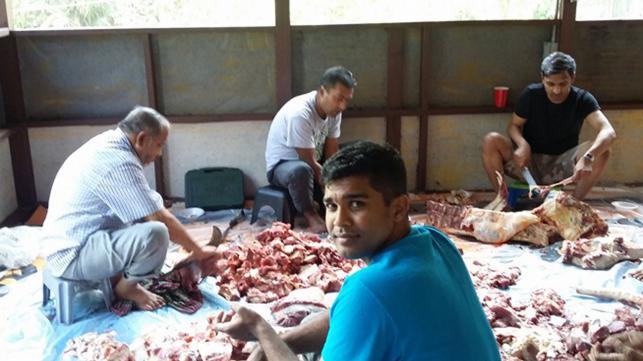 Many people without Eid Abigail Eid a little bit sad about. But the lion’s share of the lion’s share is very pleasant to the Bangladeshi people. Because most of the expatriate families are here. The arrival of Bangladeshi expatriates in America since the 1980s. But in the 9 years from 82 to 91, many expatriate Bangladeshis came to the United States from different countries of the world. Again since 91 many people came to America through OP 1 and DV Visas.

Initially the majority of the expatriates were Bachelor. So nobody thought of sacrificing. They used to send money to the country. Apart from this, offering a sacrifice was not easy. The grocery and the firm were not near the edge. So expatriates could not think of sacrificing. After the success of the time Bangladeshis started the Grosary Business. After they started the grocery, the sacrifice came in easy to reach and reach. The time goes by Bachelor’s expatriates marrying the family. The Bangladeshi brides started the family in America. After marriage, the expatriates understand the significance of the sacrifice of the exiles.
The best immigration facility in the world, anywhere in the world. Five years after a green card holder in America, get a chance to become a citizen. He has the opportunity to bring his wife, children, parents and later siblings to America to apply for the family. Those who have got this opportunity to celebrate Eid in America, the indigenous Amaze As a result of the Eid festival of Ramadan, it is quite enjoyable to be a sacrifice. Most of the Bangladeshi people live with their peers In New York, Michigan, New Jersey, Texas, Atlanta, Florida, California, expatriates live with siblings and relatives.
Crab meat cut in America . File photo: 15 ago Eid was not so colorful as of now. In the continuation of the time, the Eidon of America is a spectacle. The Eid of the sacrifice is quite colorful in America The expatriates who never sacrificed meat in the country, sacrificed their flesh in exile. Apart from this, many farms have been built for Halal meat. In addition to the major states or cities in New York, New Jersey, California, Texas, Atlanta, Florida, Dallas, Michigan, Boston, Washington, Miami, expatriates get the opportunity to sacrifice themselves as far as possible, to the farm. They go to the farm after the Eid prayers. From there, they returned home with sacrificial meat in the afternoon. Farm authorities have special arrangements for them. According to the cereals, cows and khasi are sacrificed. Expatriates themselves brought it home and cut it.
At present, there are 45 Bangladeshi groceries in 12 to 15 miles in Michigan. Each grocery is taking orders for sacrifice. Keeping orders for hundreds of crores of grocery in New York.
The price of cow here is 1200 to 1800 dollars. Khasi 300 to 450 dollars, Lamb 350 dollars