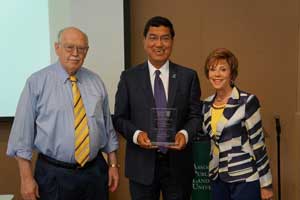 Western President Amit Chakma has been named among three 2014 recipients of the Michael P. Malone International Leadership Awards, recognizing individuals who have made significant contributions to international education at public and land-grant institutions.
Chakma is the first Canadian academic to win the award.
Sponsored by the Association of Public and Land-grant Universities (APLU), award recipients this year also include professors Krishnaswami Srihari of Binghamton University and Robin Reid of Colorado State University.
Expanding the impact of our teaching and research on the international stage is an institutional priority at Western University thats highlighted in our mission to develop global citizens whose education and leadership serves the public good, said Chakma. I feel very proud to be the first Canadian university president honoured with the Malone Award because it reflects the collective effort of Westerns entire campus community, which is renowned for providing the best student experience in the country.
The award is named in honor of Michael P. Malone, former Montana State University president, who made many contributions to U.S. public higher education through his work as chair of APLU Commission on International Initiatives. He focused the groups efforts on issues critical to international programs and increased its stature within APLU and elsewhere.
This years Malone Award recipients exemplify the true spirit of Michael Malones legacy with their amazing efforts in international education and development, said APLU President Peter McPherson. Their focus on international problems speaks well of public university systems and the willingness of our scholars to promote higher education at home and across the globe.