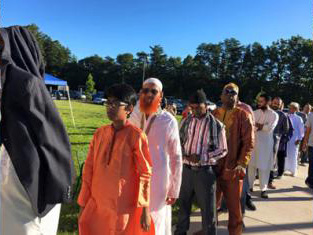 Religious excitement and enthusiasm Through Monday (September 12th) expatriate Bangladeshi celebrities celebrated Eidul Azha in Washington and other cities including Washington. In the morning, the residents of Washington brought Eid prayers to their nearest mosque. In addition to Washington DC, holy Eid al-Azhar prayers were held in the mosques of the surrounding cities. Eid congregations were held in Woodbridge, Springfield, Lorraine, Alexandria, Manassas, Bethesda and Baltimore in Greater Washington. Eid al-Azhar, three congregations were arranged at Baitul Mukarram Mosque in Arlington, Virginia. Here the chapters of Jamatas were held at 8am, 9am and 10am under the guidance of Imam Maulana Kaushik Ahmed. At the end of the prayers, expatriates were slaughtered in different farms or specific places, including Clinton in Maryland, Manassas in Virginia, Pennsylvania;
Most of the expatriates in the open field of Maryland Clinton open the field. Hundreds of expatriate families went to the nearby courtyard after the Eid prayers at nearby mosque. They bought sacrificial cows and offered them a religious sacrifice. Expats of expatriates were also noticed in Fort Washington, near Clinton. Many people organized cooking in the crib. In the local arrangements, after eating animals, after cooking, cooked on the field of the sacrifice, the family, relatives and friendly friends eat Eid meal with sacrificial meat.
US president on the occasion of Eid al-Azha Barack Obama and Fast Lady Michelle Obama greeted the Muslims of the world. In a greetings on Sunday, Barack Obama and his wife greeted the pilgrims. They said, Hajj is to get the proximity and satisfaction of the Creator through the gathering of thousands of people of different countries and cultures together with prayer and deep faith.
US Secretary of State John Kerry has greeted the Muslims of the world. In a message of greetings, he said, Eid al Azha is a special moment that creates values ​​of service, selflessness, sympathy and service to each other among all faiths. These values ​​can not be anything more important than practice and reflection.