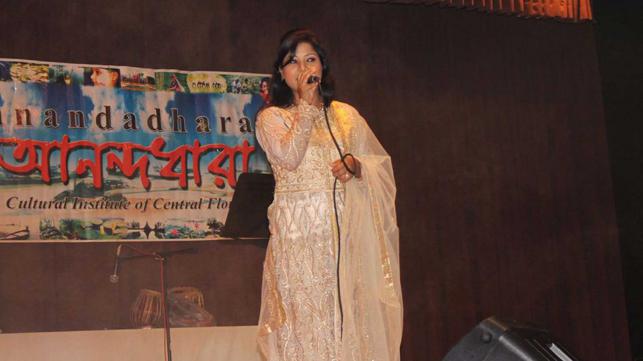 At the ceremony, different types of clothes, jewelry and food stalls. In the evening, expatriate Bangladeshis from different nearby cities started coming to the ceremony. Chats and Eid merchandise exchange. Expatriates of different ages who were present along with Bangladeshi organizations in Central Florida, including leaders and workers.
Officially the ceremony started with the welcome address of the President of Swadeshanand Swapan Adhikari and General Secretary Ashraf Razor. The spectacular cultural program began at 9pm. Children artist Pooja Adhikari and Itu Chowdhury serve music. Swapan Adhikari, music director of the 90’s band music artist Syed Milu, Arefin Reza, Lucky, Swaraj, Badal and artist of Bangla Betar Kendra Mohammad Khasru, performed music among others. Poetry and poet Shaon Mostafa, one of the founding poets and organizers of Anandadhara,
The main attraction of the show is the popular artists of Bangladesh, Mira Sinha, from 11pm onwards, the songs of popular and expatriate requests of the country. When Mira Sinha performed music, the expatriates who were present in the music made her dance with him.
From 8pm until midnight, listening to food, shopping, eating and singing.
Since the number of expatriates increasing in Central Florida has increased, many Eid reunions have been held for several years. Cultural organizations Anandadhara has always been giving cultural programs to different types of expatriates. Along with this, Anandadhara is the only organization in Central Florida where the leadership of the team is always regular for the creation of new leadership.