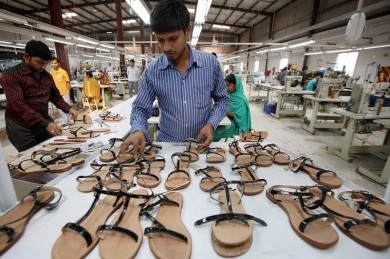 What if the shoes are not discovered ‘Rabitra’ written in the heart of Rabindra. As long as the quality of the shoes increased. Look at the shoes before the face. Human trials in shoes In the nineteenth century, Bengali Baburao used to show nababi after wearing a young calf skin shoe. Today the Bengalis themselves are not wearing barefoot shoes, they are defeated by the world. Where did the clothes of Bangladesh made? Hug melts in Europe and America Himsim Bangladesh to supply shoes. Due to the need to keep the production consistent with the demand. Production of 115 factories in the day. It is also less. Want more

Investment in leather industry is increasing with the increase in exports. Foreign investment is also coming. Convenience in importing modern equipment. Not even tiring in dollars Discounts on government tariffs are enough. Further progress is possible to save the cost of importing raw materials. They are also arranged. Infrastructure needs improvement. Tannery to the rally to shift to Savar 22 million square feet of skin production annually It does not work at all. 50 percent used shoes. Some other skin products A lot of survival. If you are used for production, you can meet the demand for export.

Synthetic shoes without skin are very popular abroad. Synthetic shoes production in Bangladesh is also increasing. Special attention to making raw materials. The shoes were brought before China, from India. He does not need it. There is no more problem in making Bangladesh. Intermediate agents are consuming a part of the profit of the export. The profits will increase if the business goes directly.

Three years ago, the export of shoes was 41 million and 93 million dollars It has grown to a rising rate of 71.4 million dollars. The order has increased more than a quarter. Continuing the progress of the shoe market by cutting the global market downturn. The workers are sent abroad to the training in the factory. There is a plan to uproot Timur’s deficit Need a little time If everything is fine, the export will be tenfold.

In addition to America, the shoes of Europe are going to Germany, France, Denmark, Italy, Poland, Portugal, Spain, United Kingdom, Austria, Belgium in Europe. Russia, Canada, Australia and Japan are very much liked. Why not? Quality of leather is comparable Rare in the world In Bangladesh the prices are cheap and prices are lower. There are more than 3,800 showrooms of Europe’s largest shoe seller Dycheman, with footwear in Bangladesh. Customers are very kadr That’s the basis of the development of leather industry in Bangladesh. There is no pair of shoes in Bangladesh to make the economy harder.